You may remember that some months ago I was waxing lyrical about the concept of a Salon Musical, having been invited to one by the lovely violinist Madeleine Mitchell. So enchanted was I by the evening that I suggested to Madeleine that maybe she might care to hold another in our ‘withdrawing room’ at Lawn Road – and on Saturday night, that came to pass.

Unfortunately, so excited was I by the whole procedure that I entirely forgot to take any pictures. So the best I can do is a ‘morning after’ shot of an abandoned music stand and an eclectic collection of chairs in tidy rows…

£5 IKEA plastic ‘folders’ rubbing shoulders with elegant Italian steel and cane numbers bought a considerable expense some years ago, and the even more expensive, and now most desirable, 1970s Scandi wooden dining chairs bought in Columbia Road flower market! And all boxed in by the ‘normal residents’ – a couple of wing armchairs with my six foot and very-sleepable-on paprika velvet sofa making up the front row!

But while the seating was scarcely elegant, the musicians certainly were. Madeleine herself in flowing burgundy silk, viola player Kate Musker, also in flowing burgundy, violinist Gordon MacKay, cellist Joseph Spooner and clarinetist Tony Lamb. Equally elegant was the programme.

Rondo for Dancing – a short piece by Grace Williams, a Welsh composer who died in 1977 and whose work Madeleine champions as being sadly overlooked. (Apart from leaving a large body of symphonic work and one opera, Grace was the first British woman to score a feature film – Blue Scar – in 1949.)  On International Woman’s Day this year, Madeleine, Gordon and Joseph released a record of Grace’s Chamber Music.

This was followed by Dvorak’s String Quartet No 12 in F (American) – a fabulous piece with a totally heart wrenching  slow movement. As Madeleine said in her ‘programme notes’ –
During a 3-year stay in the United States, Dvorák spent some time in a Czech immigrant community in Iowa. In this idyllic pastoral environment he felt very happy, and composed two major works – the Quartet Op. 96 and the String Quintet Op.97. The nickname ‘American’ was not given to the Quartet by the composer, and little evidence has been found of any musical material derived directly from African-American or native American sources. However, certain aspects, such as rhythmic ostinati, frequent solo melodic lines and a feeling of simple enjoyment of the natural world do place this work outside the main European tradition, in which musical ideas are usually developed in a more structured and rigorous manner. One particular feature is the use throughout the piece of the pentatonic scale, common to the folk music of many countries. After an early performance of the Quartet, one listener commented “there is the spirit of eternal sunshine,” – an apt description of this glorious music.

And finally Tony Lamb joined the group for Mozart’s Clarinet Quintet in A, K 581 – a glorious piece of music that even if you think you don’t know it, I am sure you will have heard. Again, to quote Madeleine:
If Mozart had not known Anton Stadler – a fellow Freemason and a leading player of the day – the clarinet repertoire would be incalculably poorer. The two men first met in Vienna in 1783, and Stadler’s artistry inspired several works which have never been surpassed: three wind serenades, the Trio K 498 for clarinet, viola and piano, the Concerto K 622, and this Quintet. The whole piece is a miracle of musical form and texture, with the clarinet sometimes set against the strings, sometimes integrated with them. In the magical Larghetto, the clarinet floats a long melody above a muted string accompaniment, later sharing a new musical idea with the 1st violin. Unusually, the Menuetto contains two trios: the first, scored for strings alone, is intense and passionate, while the second is a cheerful Ländler. The last movement is based on a cheeky tune that might easily belong to Papageno. In a typical stroke of genius, Mozart follows several lively variations with one marked Adagio, in which time almost seems to stand still, before a whirling Allegro brings the Quintet to its close.

Pimms glasses, filled to brimming on arrival, were stilled for the concert and then refilled as my delighted audience of 20 raised the roof, enjoyed an Elgar encore – and then headed to the kitchen for supper.

While not exactly tropical, the evening was sunny enough for guests to spill out onto the balcony and even down into the garden – while tucking into a classic Lawn Road, gluten-free and largely milk-free/vegan supper.

A particularly tasty version of what Alex calls my ‘ploughed field lentils’ – Puy lentil with chillis, red peppers, ginger, water chestnuts, cashew nuts and coriander. They do taste delicious, but do definitely look like a ploughed field!

Crudités with a broad bean hummus and for the meat eaters, the MOST delicious super thinly sliced topside of beef with homemade fresh horseradish sauce (mayo, coconut yogurt, grated horseradish, lemon juice, salt and lots of pepper) and a stunning spelt bread from Gails. Not gluten free of course, and certainly not cheap at £6 a loaf – but a sort of coarse pumpernickel with big grains of tasty spelt and – currants…. I was very dubious about the currants when cutting the loaf (again very thin slices) but actually, the combination worked extremely well.

All finished off with wonderful English strawberries from Igtham in Kent and delicious cherries.

Our audience was a mix of my friends and of Madeleine’s so that everyone knew at least one other guest – but there were plenty of new like-minded souls to meet and talk to. And, an extra bonus provided by the music, a ready made topic of conversation.

I loved it – and if the emails and notes through the door the following morning are anything to go by – so did my guests.

So…….. A possibility of a viola, flute and harp trio in July or August – assuming that the harp can be got up the front steps…. And, in September, an evening of classical Indian music with my lovely basement tenant and BBC presenter, Soumik Datta….. If any of you saw his three part series, Rhythms of India, a few weeks ago you will be hammering on the door to get a seat!

Oh and, just to add a little colour – here are the lovely Sweet Williams – tightly knit clusters of dark red and pink flowers which you rarely see outside a cottage garden – and stunning white spikes of scented stocks, brought by my guests. 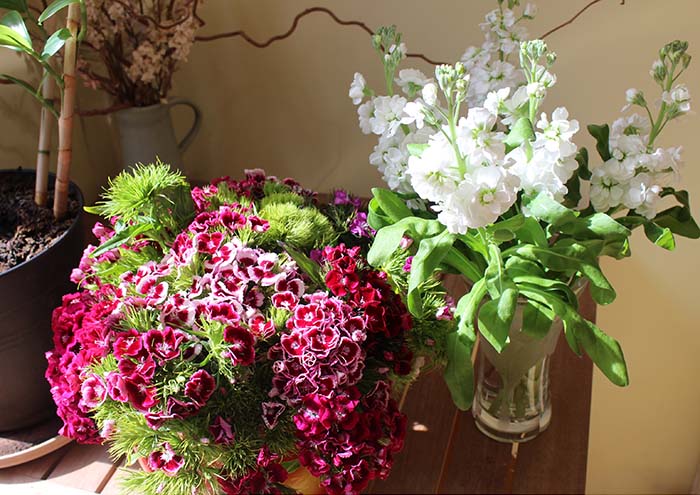 And here is the herbaceous patch looking extremely lush and lit for the evening, although you can scarcely see them, by the fairy lights which have leapt back into life after a period when, thanks to the foxes munching their wires, they plunged the house into darkness whenever we turned them on!